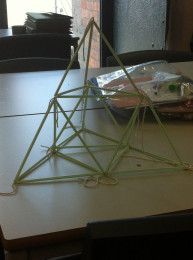 A pyramid as big as a T-Rex?

Yes, this straw-built pyramid prototype may not look like much… but imagine it large scale, built in number and stacked to the rafters to create an UBER-PYRAMID! A structure as big as a T-Rex that you helped create. Sssssh! You guessed it, it’s another sneak peek of what we have in store for The Big Bang North West.

We’ll be organising teams of people to make smaller pyramids and we’ll put them all together at the end. When completed our magnificent monument will boast 1024 separate tetrahedra and will be enormous! It’s going to look cool, but we’re going to need everyone to lend a hand. You in?

The Big Bang North West takes place at Aintree Racecourse on the 8th of July, have you booked?

Hop in a Viking longboat loaded with weaponry, have a go at Roman surgery (eek!), race against Usain Bolt, ‘test your Selfie’ and hop on a zoo bus… not forgetting our giant pyramid and infamous FIRE SHOW!

Click here to register your group, sponsor us or volunteer… it’s going to be the biggest and the best yet!