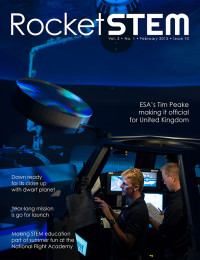 Did you miss the newest issue of RocketSTEM?

Featured in the 10th issue of RocketSTEM is:

RocketSTEM magazine can be read online or downloaded as PDF file from the RocketSTEM website.

Print copies of the magazine are available from Blurb.com.