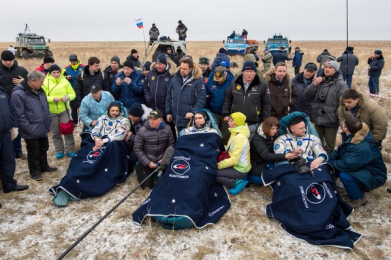 Commander Scott Kelly & the Soyuz 44 crew have landed safe and sound back on Earth – Welcome home! The astronauts bring with them the RHS ‘Space Seeds’ that schools across the country have been waiting for! We can’t wait to grow ours, can you?

The purpose of Scott Kelly’s year long journey on the ISS is so that NASA can study the long term effects that space has on a human body. Commander Kelly will undergo a series of tests to determine how well he has adjusted to gravity.

The Soyuz 44 crew set a record for the space station and for the longest U.S. space mission.

On the 2nd of September 2015, the Royal Horticultural Society ‘Rocket Science’ seeds were successfully launched into space. The seeds departed from Baikonur, Kazakhstan and after several months on board the International Space Station with astronauts including Commander Kelly and Major Tim Peake, the seeds successfully landed back in the Pacific Ocean with the Soyuz crew.

Next, they will be packaged up with identical seeds that have stayed on earth. Participating schools will each receive two packets of 100 seeds to grow and compare, and a collection of fun and inspiring curriculum linked teaching resources and posters, tailored according to pupil age (Key Stages 1 and 2 or Key Stages 3,4 and 5).