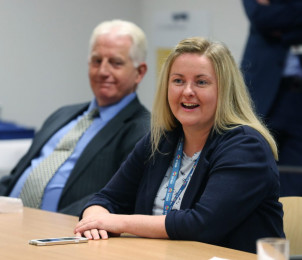 On Friday the 15th of July, MerseySTEM were invited to a Ministerial visit hosted by Getrag Halewood with Baroness Williams of Trafford, Parliamentary Under-Secretary for The Department for Communities and Local Government.

The visit enabled STEM apprentices to share their experiences and allowed invited guests to discuss how Liverpool City Region can work with the Government to promote the study of STEM skills, STEM Apprenticeships and careers. 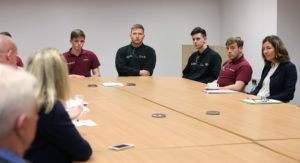 Baroness Williams ministerial visit began with a welcome reception, followed by a factory tour of Getrag Halewood and a round-table discussion.

MerseySTEM Managing Director Michelle Dow said, “This is an amazing opportunity for all involved to ‘talk STEM’. It is invaluable to collaborate with Government and industry and talk to young apprentices so as to develop new strategies from their experiences. MerseySTEM are dedicated to promoting STEM across the region by connecting schools & businesses and facilitating interactive, fun events – we excite and inspire young people about STEM and that is what this meeting was all about. It’s another fantastic step forward for STEM skills, STEM Apprenticeships and careers.”

Apprentices from Jaguar Land Rover & Getrag were joined by: