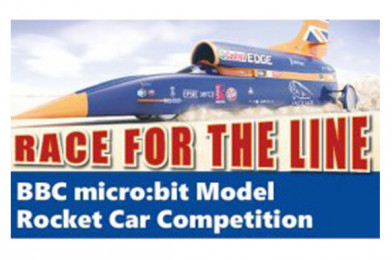 Race for the line and win a trip to South Africa with the BBC Micro:bit Model Rocket Car Competition. Register now to enter and receive your free kit. The deadline has now been extended to the 30th of November 2016!

The BLOODHOUND Project is using a 1,000mph world land speed record attempt to inspire the next generation to enjoy, explore and get involved in science, technology, engineering and mathematics.

Sponsorship has been secured to fund 25,000 foam model rocket car kits in the UK. Extra kits are available to order through www.racefortheline.com.

Rocket car kits will be modified by school teams to run faster. This is a great opportunity to get students excited about STEM, work as a team and get hands on experience of programming and aerodynamics in one of the most fun ways possible.

Sensational Prizes!
All finalists get their school name printed on the tailfin of the BLOODHOUND car plus:

1st – The winning team of students and one teacher from the winning School will win an all-inclusive trip to South Africa to spend a week with the BLOODHOUND Race team on the Hakskeen Pan and enjoy a week of activities in the area. In the event that the BLOODHOUND SSC undertakes a test run or record breaking run during that week the winners will be invited to watch as part of the BLOODHOUND team. 1st place cash prize of £1,000 (including VAT) awarded to the school.

The goal is simple – the 2 fastest primary and secondary teams to compete in the Model Rocket Car Competition Race Hub open days during Feb and March 2017 are invited to the Regional Finals in March 2017. The fastest primary and secondary team at each regional finals are invited to the national final in June 2017. The winner will be the fastest car on finals day.