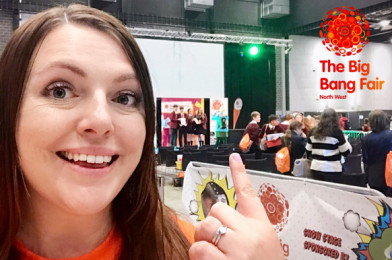 What is it like being part of our team?
We spoke to Continuous Improvement Manager Ann Donaghey, who attended our 2017 event:

“As a Big Bang North West volunteer, I got to experience all the excitement of the build up as the students exhibiting and visiting entered the Liverpool Arena.

I helped greet and direct exhibitors and visitors, coordinating traffic flow to register while asking people what they were most keen to see and providing them with goodie bags and an exhibition plan. Some children, particularly the younger ones, were very excited and pleased to be there.

I also got the chance to network and meet new like-minded people; as well as those in rather different occupations to myself, throughout the day by chatting to other volunteers.

My lunch was provided by All About STEM along with refreshment vouchers. I got time for myself to tour the exhibits and look at the very impressive student projects which were being judged throughout the day.

After the exhibition, I helped coordinate school visitor traffic out of the building and had time to watch the project awards being presented also. The most popular exhibitions seemed to be the robots and the explosion demonstrations – Big Bang by name after all!

It was a pleasure to be part of the team and I hope that among the visitors, there will be some inspired to pursue a STEM career and find their purpose.”

Thank you Ann, we really couldn’t make it happen without our amazing volunteers!

Find out more about Ann and her work…

If you would like to support our event, we will be posting our volunteer call on our website in 2018. In the meantime, how about becoming a STEM Ambassador?