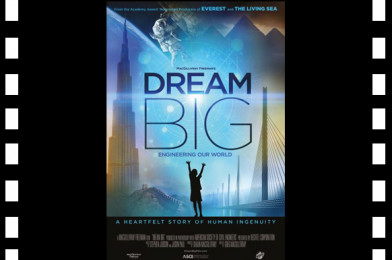 Who will build the amazing future of our human race? That question sparks a giant-screen adventure unlike any other in Dream BIG: Engineering Our World, an epically fun tour of inspiration through the visionary advances made by yesterday’s, today’s – and most thrillingly of all, tomorrow’s engineers.

“Upon first consideration, it might not seem the stuff of grand cinematic adventure. But could engineering secretly be an exciting, creative, heroic realm where the optimists of today are creating the life-saving, world-altering marvels that will make for a safer, more connected, more equal and even more awe-inspiring tomorrow?

With an eclectic, stereotype-bursting engineer cast, the huge story told by Dream Big answers that question with a resoundingly “yes” using a series of surprising human stories to expose the hidden world behind the most exciting inventions and structures across the world. It is not only a journey through engineering’s greatest wonders, but equally a tale of human grit, aspiration, compassion and the triumph of human ingenuity over life’s greatest challenges.”

Don’t miss out on your chance to see Dream BIG. Click here for screening details, venues are continually being added.