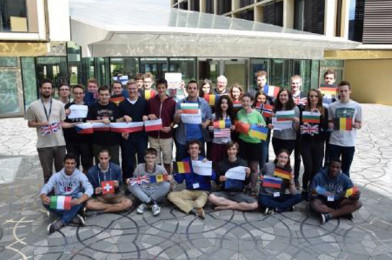 PROMYS Europe is designed to encourage mathematically ambitious students who are at least 16 to explore the creative world of mathematics.

First-year students focus primarily on a series of very challenging problem sets, daily lectures, and exploration projects in Number Theory. There will also be a programme of talks by guest mathematicians and the counsellors, on a wide range of mathematical subjects, as well as courses aimed primarily at students who are returning to PROMYS Europe for a second or third time.

PROMYS Europe is a partnership of Wadham College and the Mathematical Institute at the University of Oxford, the Clay Mathematics Institute, and PROMYS (Program in Mathematics for Young Scientists, founded in Boston in 1989).

The programme is dedicated to the principle that no one should be unable to attend for financial reasons. Most of the cost is covered by the partnership and by generous donations from supporters. In addition, full and partial needs-based financial aid is available, which can cover the fee and travel costs, in part or in full.

The deadline for first-year student applications is 18 March 2018.

PROMYS Europe 2018 will run from 15 July to 25 August at the University of Oxford.