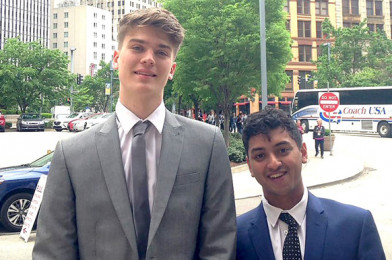 Three winners from this year’s Big Bang Competition were recently given the opportunity to represent the UK in Pittsburgh. UK Young Engineer of the Year, Josh Mitchell and Senior Science Winner Krtin Nithiyanandam were chosen to compete at ISEF (International Science and Engineering Fair), while Junior Engineering Runner-Up, Nicole Hirst was invited to participate in the companion Broadcom MASTERS programme.

ISEF is the world’s largest pre-college science competition. Approximately 1,700 winners of local, regional, state, and national competitions are invited to participate in this week-long celebration of science, technology, engineering, and maths. At the event, these young innovators share ideas, showcase cutting-edge research and compete for more than $4million in awards and scholarships.

Broadcom MASTERS brings together rising stars from across the world to represent their nations for this international exchange. The students attend a range of activities at ISEF as well as participating in a programme fun and engaging hands-on science & engineering activities.

Given the prizes on offer it’s no surprise ISEF is a hugely competitive fair and we’re delighted that as well as having an inspirational time, our talented young UK winners each scooped a prize while they were there. Josh Mitchell won 4th place in the world in the Robotics and Intelligent Machines category for his flat-pack 3D printer, Plybot and Krtin won 3rd place in the world in the Material Science category for his work on bioplastic bottles with antibacterial and toxicity-reducing properties to purify drinking water.

The journey for each of these Big Bang Competition winners started with an idea for a project. We’re so proud of what they have achieved already but we’re sure there’s more to come from them and all the other amazing young scientists and engineers who take part in The Big Bang Competition

Josh Mitchell is a student here in the north west, you could be next!

Enter the Big Bang UK Young Scientists and Engineers Competition, you could be showcasing your project at The Big Bang North West!