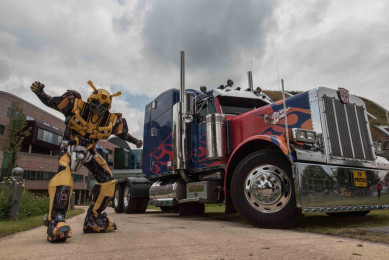 Transformers Optimus Prime and Bumblebee drove in to help school children build robots at a special event for the IFB2016 fringe festival The Edge.

The spectacular truck – the character’s incarnation before he transforms into a giant robot – arrived at Alder Hey Children’s Hospital in Liverpool for a Robot Challenge day. 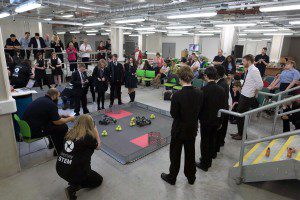 Dozens of children were in awe of the blue and red vehicle sprayed with flames, which is a replica from the box office smash hit film series Transformers which has amassed over $3 billion in global box office revenues. 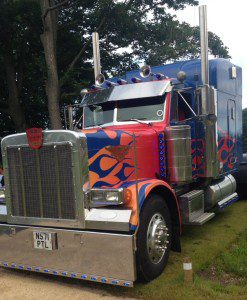 Transfomers was one of the biggest cartoons and toy franchises in the 1980s and became popular again with a new generation of fans when the first film was released in 2007. A fifth instalment called The Last Knight is currently in filming and stars Mark Wahlberg, Sir Anthony Hopkins and Isabel Moner and is due to be released next year.

The Optimus Prime truck – who is operated by Hasbro –  and his friend Bumblebee were in town to visit the school children from the Liverpool City Region who were attending The Edge IFB2016 Robot Challenge at the hospital’s Innovation Hub on Wednesday, June 15. 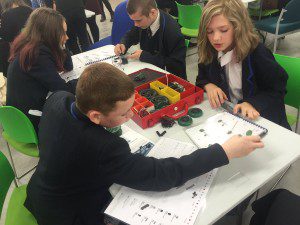 Forty students aged 13 and above formed 10 teams using organisers MerseySTEM’s Protobot System from Vex Robotics to build the machines and pit them against each other in a series of matches and Assistant Mayor of Liverpool Nick Small also visited the fun day. 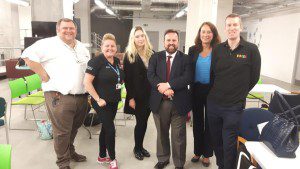 The junior engineers were taught new skills in leadership and problem solving while learning design, science and engineering principles to make fierce and competition ready robots.
The event was sponsored by Liverpool-based ChargePoint Technology, a world-leading engineering and manufacturing company who supply valves to some the world’s biggest pharmaceutical and chemical businesses, and attended by Managing Director Chris Eccles.

Mr Eccles said: “The day has been incredible. I never thought I would come face to face with Optimus Prime.

“He was one of the cartoon characters from my childhood and to have this awesome truck in Liverpool for this event is very fitting. It is vital to teach children about the importance of engineering, design and science because those skills form the most crucial industries in the world and offer many employment opportunities.”

“The robot challenge was a huge amount of fun but I hope and believe that it gave the children the inspiration to embark on a career in science, technology or engineering.”

Cllr Nick Small, who is Cabinet Member for Education, Employment and Skills said: “This was a great event. It was fantastic to see so many young people get engaged with the robot challenge.  This is a really good way to get young people to see how important – and fun – STEM subjects can be and is a great way to showcase skills that are needed in the world of work. Well done to everyone involved.” 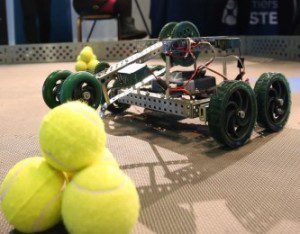 MerseySTEM’s Managing Director Michelle Dow said: “I love our Robot Challenges and the children are so focussed on what they are doing, they really enjoy building and battling. The robot days give us the opportunity to promote teamwork and provide careers advice to students using real role-models from our city – and as Optimus proves, robots are cool!” 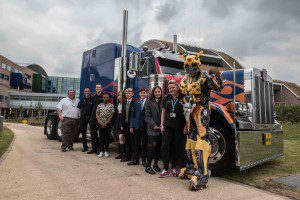 The Edge is IFB2016’s fringe festival and will run alongside the main festival from June 13 to July 1. The Edge is an innovative, creative and dynamic programme of events that will incorporate three main themes throughout the festival under the headings: ‘conversations with’, ‘how to’ and ‘provocations’. 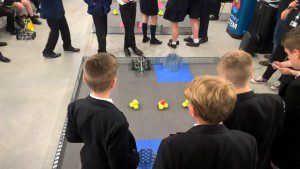 Dr Andrew Rose, from the Liverpool City Region Local Enterprise Partnership, who are supporting The Edge, said: “ChargePoint Technology, Alder Hey Children’s Hospital and MerseySTEM exemplify the region’s innovative culture and determination to improve its prosperity, with the young people participating in the robot challenge being central to the region’s future success on the global stage. Optimus Prime was a guest of honour and the children were amazed by the truck. I hope they have taken away from today a drive to learn more about science and technology.” 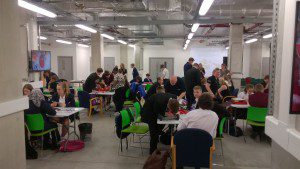 IFB2016 is being delivered in partnership with UK Trade & Investment, the GREAT Britain campaign and with the support of the UK Government. It is expected to attract thousands of international SMEs and high-level delegates from some of the world’s fastest growing economies.

The three week summer gathering of inspirational speakers, business networking and over 80 events will be clustered round three themes: manufacturing, creative and digital, and energy and environment.

IFB2016 Festival Director Kate Willard said: “These young people are our future workforce so it’s important that we enthuse them all about these critical subjects – and what cooler way to do this than building robots. To bring such a huge movie star in Optimus Prime to Liverpool  during the festival is really wonderful and it shows that IFB2016 and The Edge are not just focussing on business but on how business is present in all aspects of life, whether that be in science or comic books.”

“That is a really important message to young people and I want to congratulate MerseySTEM, ChargePoint Technology, Alder Hey Children’s Hospital and the Liverpool Enterprise Partnership for putting on such an excellent event.”