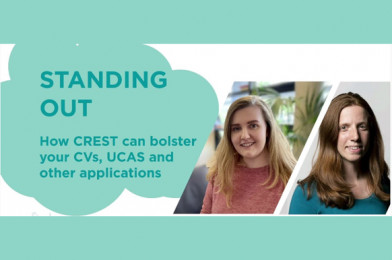 CREST is a STEM enrichment programme for young people that inspires, enables and rewards open-ended project work. The levels are non-sequential and can be run by any age over any length of time.

Young people can ‘stand out’ with CREST when they’re applying for university, an apprenticeship or a job as CREST awards are well-regarded and can be recognised as a mark of success.

“Admissions tutors and potential employers will want to know what you’ve done, and more importantly what you learnt from it (not just about the subject but also skills). This helps them understand the way you think, so tell them about your CREST project and how you think you have grown from the experience.”

Take a look at this webinar to find out more…

Have you visited the CREST Awards Webinar Centre?

Each webinar focuses on a range of topics, including CREST projects, the CREST Award levels and how CREST can boost your CV or UCAS hopes.

All sessions are streamed live on the British Science Association YouTube channel alongside a Q & A with questions answered by the CREST Awards team.