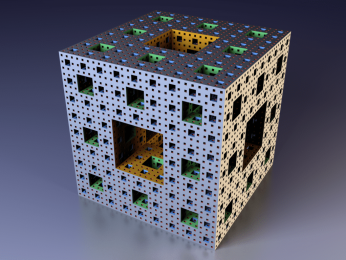 What’s a MegaMenger… and what’s a Menger Sponge?

I’ll take a deep breath for this one… (don’t panic, it’s basically building cubes around the world to make one glorious whole!)

As a distributed fractal maths project by the end of October, twenty Menger Sponge cubes will be in different cities around the world. In each location, volunteers will build 8,000 small cubes out of nearly 50,000 business cards. These will be combined in groups of 20 to create 400 “level one” Menger Sponges. These will also be combined in groups of 20 to make 20 “level two” sponges, which then form one massive “level three” Menger Sponge. The resulting fractal cube will be nearly one and half metres tall.

These twenty level-three Menger Sponges around the planet would then form a distributed level-four sponge, the largest ever made out of business cards. The plan is for every location to build their level-three sponge during the week of the 20 to 26 October 2014. By Sunday 26 October, twenty locations around the globe will have been united in building an amazing 3D fractal.

Would you like to be a part of maths history?
Everything you need to get involved is here!