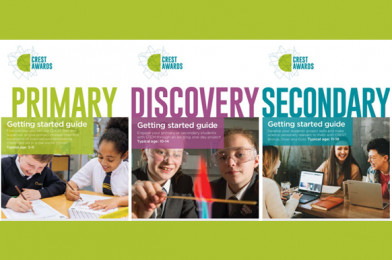 CREST is a fantastic way to keep learning fun and interactive both in the classroom and at home.

The CREST Awards scheme is a programme for young people, providing a flexible STEM project framework that inspires and engages 5 to 19 year olds.

If you’re a teacher, you can discover how simple it is to run CREST in school via their ‘Getting Started’ guides or you can visit the British Science Association CREST Webinar Centre for informative step-by-step videos.

During a CREST Award project, students take on the roles of scientists, researchers, engineers and designers to pursue their own ideas. No CREST project is identical. Even when set the same brief, students produce unique, creative solutions and ideas to tackle the problem – exciting and enriching!