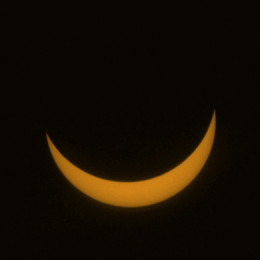 How to view the Solar Eclipse safely!

On 20 March a total eclipse of the Sun will take place, visible from the North Atlantic Ocean. Observers in the UK and Ireland will see a partial solar eclipse, with up to 97% of the Sun blocked out. This will be the deepest eclipse in the UK since 1999 and until 2026.

Although eclipses of the Sun are spectacular events, they should NOT be viewed with the unaided eye except during the brief period of totality, which this time will not be visible anywhere in the UK. Despite a large part of the solar disk being covered, looking at the partially eclipsed Sun without appropriate protection can cause serious and permanent damage to the eyes.

The Royal Astronomical Society is backing the stance of Public Health England and the Royal College of Ophthalmologists, who are warning about the risk of eye damage from looking at the Sun. With the Society for Popular Astronomy (SPA), the RAS has produced a booklet on how to safely view the eclipse that suggests a number of ways to project the solar image rather than looking at the Sun directly.

The booklet is also a mine of information about eclipses and a fantastic future resource.