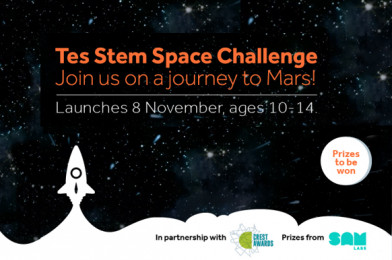 Take the nationwide #TesStemChallenge, accredited by CREST Awards and blast off on a journey to Mars with your class or science/STEM club (aged 10-14).

Choose one of three different challenges (4-7 hours) and complete it between Thursday 8 November 2018 and Sunday 17 March 2019.

You’ll be able to apply for the Discovery CREST Award on behalf of your students once the challenge is completed.

Share your project photos and videos with TES by emailing [email protected] for the chance to win spectacular SAM Labs prizes in their prize draw!

Since the 1960s, space agencies around the world have carried out a variety of missions to Mars sending probes, orbiters, landers and rovers to find out as much about the red planet as possible. The next big step is a manned mission to Mars and a number of space agencies are working towards putting humans on the surface of Mars within the next two decades.

The TES challenges ask students to look at three of the key elements required for a successful manned mission to Mars; the voyage there, the descent to the surface, and living on the planet itself.

To win spectacular SAM Labs prizes, share your classes’ project photos and videos by emailing [email protected] between 8 November 2018 and 17 March 2019. Each photo or video submission will count for one additional entry in to the pize draw.

One lucky class will win a Classroom Kit worth £999.00 and three runner-ups will receive an Alpha Kit worth £129.00 each. Winners will be randomly selected and announced by 31 March 2019.