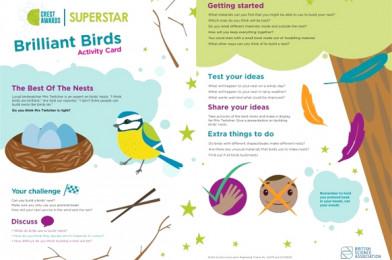 If you’re encouraging your learners to take part in the RSPB Big Schools’ Birdwatch then you could utilise their observations and further their learning with a CREST Award!

Every year, educators from every corner of the UK take part in The Big Schools’ Birdwatch with their classes. There’s plenty of flexibility to run it with any age group of children and resources to help. Take part anytime from the 5th of January with results submitted by the 21st of February and do something great for nature!

You can sign up until the 30th of January & receive your free school pack here.

Brilliant Birds is one of many CREST Superstar Challenges. The activity is designed to get children thinking about birds, habitats, designing and making.

CREST SuperStar is designed for 7 – 11 year olds, and gives children the chance to participate in hands-on science through enquiry-based learning.

-Find out more about CREST Superstar Challenges here
-CREST Awards & The All About STEM Competition!
-Take a look at the resources
-All About CREST Awards
-CREST North West