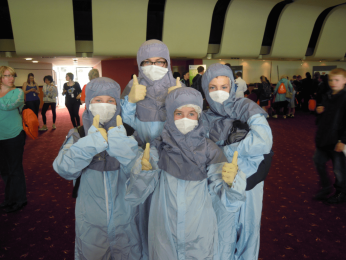 We have received fantastic feedback from our Big Bang North West attendees and we’re overjoyed that you all had an amazing time. We’d like to say a HUGE thank you to our Headline Sponsor AstraZeneca. As well as funding part of the event and supplying over 20 laptops for the Coder Dojo, their stand has stood out as one of the event highlights.

Students from The Catholic High School Chester visited the Big Bang North Wes at Aintree Race course on the 8th July. The fair promotes careers in Science, Technology, Engineering and Maths. It was organised by Mersey STEM and was the biggest and best regional event ever!

The occasion was sponsored and supported by many STEM based companies from the region including AstraZeneca, which quickly became a favourite with lots of students as they were allowed to try on their lab suits. Our students were really disappointed to learn they had to give them back, I think they would have happily worn them all day!
There were live shows, competitions, activities, hands on workshops and loads of careers advice from Companies, Colleges, Universities and Institutions.

Most of the stands were manned by young graduates or STEM ambassadors who engaged the students in conversation and really knew how to get them involved in their activities.  This provided a fantastic opportunity for students to find out about the work these companies do and what sort of qualifications are required.  During the event students were given lots of ‘Freebies’ and careers advice – to fill their free Big Bang Backpack!

Students from North West schools presented their Crest Award projects as part of the National Science and Engineering Competition and were judged to go through to the final at the National Big Bang Fair in Birmingham next March. This was followed by a prize giving ceremony at the end of the afternoon.  It was during this time when we were able to celebrate our very own STEM Club leader, Mr Graham, who won the STEM Club Leader of the Year Award! Fantastic recognition for his seven years dedication to STEM.

The event was attended by thousands of school children from across the North West and I can’t recommend it highly enough. The day was fun, completely interactive, packed with fantastic careers advice, well organised and plenty to keep students engaged for the day and well worth a visit next year.

Thank you and well done to all involved!

AstraZeneca are returning as our Headline Sponsor for The Big Bang North West 2015!
Is your school coming? You don’t want to miss this…
THE BIG BANG NORTH WEST 2015 – CLICK TO BOOK YOUR PLACES!