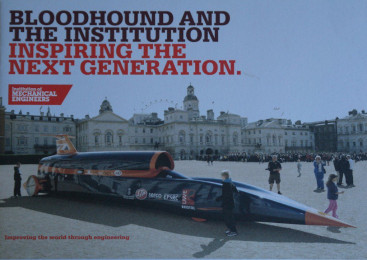 We are overjoyed to announce that the Institution of Mechanical Engineers will be exhibiting at The Big Bang North West 2015. You won’t believe what they have in store!

The Bloodhound SSC (Supersonic Car) project is a cutting-edge engineering adventure that is inspiring engineers of the future. The Bloodhound SSC team are building a supersonic car that they expect to break the world land speed record of 763mph. The Institution of Mechanical Engineers is supporting the project to create a national surge in the popularity of Science , Technology, Engineering and Mathematics, and inspire the next generation of engineers and scientists.

Come and see what is happening and is planned for the future, plus take some brochures to provide careers guidance.
JUST TWO DAYS TO GO!