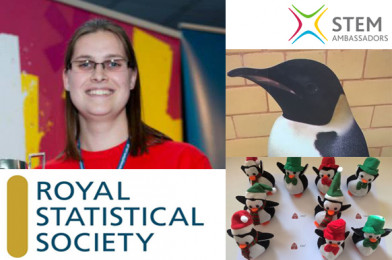 We spoke to our inspirational (and super-fun) STEM Ambassador, Laura Bonnett, about her latest outreach activity.

I am a National Institute of Heath Research Post-Doctoral Fellow at the University of Liverpool.  My primary research interest involves estimating time to next event for patients with recurrent conditions such as epilepsy and asthma.  In addition, I am a STEM Ambassador, and a member of the Royal Statistical Society (RSS) Education Committee.  I have been an Ambassador since 2010 and have now undertaken 29 activities in local schools, and at science fairs such as The Big Bang North West.

As part of my role on the RSS Education Committee I am developing statistics outreach activities that can be used by anyone wishing to engage and inspire the next generation of statisticians.  To date, together with Dr Simon White from Cambridge’s Biostatistics Unit, we have developed four activities – how random are you, how to always win, biased sampling, and stick or switch.  These resources will soon be launched by the RSS, together with brief video demonstrations. 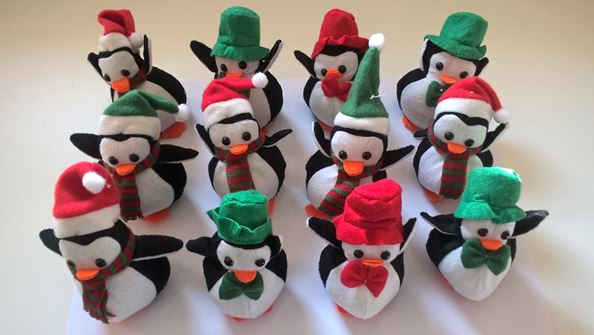 Our focus has now turned to the next four activities to be developed.  The first one is entitled “how many penguins” and is based on an article which was published in a statistics magazine called Significance back in 2012 (ow.ly/CWv530b9Vv5).  The article describes how aerial photos have been used to discover that there are many more penguins living in Antarctica than we originally thought.  Novel technology enables high quality images to be taken whereby penguins can actually be counted.  However, prior to that estimates were based on surveys, or by photos of penguin poo – cue a potentially great statistics outreach activity in my opinion! 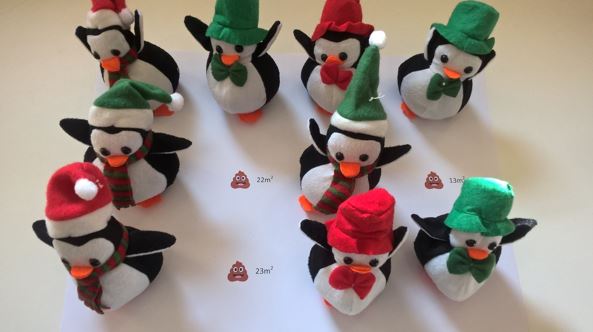 The purpose of the activity is to demonstrate the statistical concepts of populations and sampling.  The population of penguins of interest here is all the penguins living in the Antarctic.  It’s far too difficult and costly to go there and count them all – they all look the same for a start!  Therefore we have to think of a different approach.  We have aerial photos that show large brown patches on the snow – penguin guano (poo to you and me!).  We can calculate the surface area of this poo and use this to help us estimate how many penguins are living there.

Next we estimate the amount of poo we can see in the aerial photo of the Antarctic.  With a bit of careful “statistical magic” we can then estimate how many penguins live at the Antarctic.  If you want to know more about the “magic” you’ll have to come and see the activity in action, or wait for the RSS to release the resource next year!! 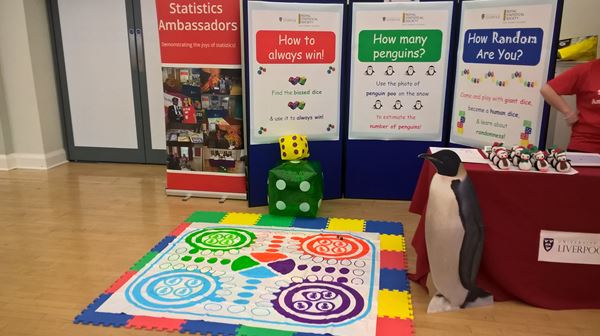 I first trialled this activity at the Meet the Scientist event at Liverpool’s World Museum on 18th March.  The families visiting the stand tended to include very young children (under 8) whereas the activity was targeted at secondary pupils.  However, all of the young people had priceless expressions on their faces when we showed them that by using three zoo penguins we could estimate how many live in Antarctica!

The activity still needs a bit of tweaking, but I’m confident that “how many penguins” will feature at a science fair near you soon!  Keep an eye on the RSS website for further details.

We love this Laura, hopefully the penguins (and their poop) will make an appearance at our next event too!