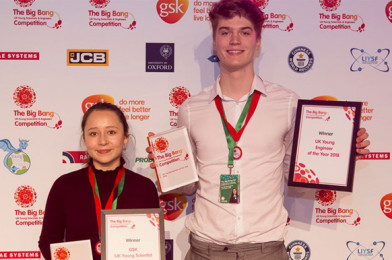 Emily Xu and Josh Mitchell have been awarded the top prizes at The Big Bang UK Young Scientists and Engineers Competition.

Josh Mitchell, aged 18 from Holmes Chapel Comprehensive School was awarded Engineer of the Year for his project, ‘The Plybot’. In his project, Josh aimed to prove that it was possible to build a 3D printer for a fraction of the commercial cost, which was easy to assemble at home and didn’t compromise on print quality. His final creation, which fits inside two 13-inch pizza boxes (unassembled), snaps together using just 18 bolts and produces print-quality that was indistinguishable from commercial printers, costs £49.

Josh said: “The Big Bang Competition has been brilliant – I had such a fantastic time last year that I wanted to return this year with my project ‘The Plybot’. I’m delighted to have won and I hope the success continues into my Kickstarter campaign for The Plybot to get these low cost 3D printers into people’s hands.”

Meanwhile, Emily, aged 18 from the James Allen’s Girls’ School in Dulwich was crowned GSK UK Young Scientist of the Year for her project, titled “New Ways Of Separating Mirror Image Molecules”. Emily’s project looked at new methods for separating different types of molecules that can be very difficult to distinguish, as they are mirror images of each other. This process could be very helpful in the pharmaceutical industry – in the case of ibuprofen, this could help make it more effective; in the case of thalidomide, this could have eliminated negative effects.

Emily said: “I’m really shocked but at the same time I am very honoured to be given this award. The overall Big Bang experience is definitely one that I’d recommend to any other young person interested in pursuing science.”

Over 500 finalists from across the country were selected to show their ideas at The Big Bang Fair where ten were then shortlisted to pitch Dragon’s Den-style to a panel of VIP judges – including Nikki Yates (Senior Vice President, Pharmaceuticals Europe, GSK), Andrew Smyth (Rolls-Royce aerospace engineer and former Great British Bake-Off contestant) and Alex Deakin (Met Office meteorologist and weather presenter).

The Big Bang Competition is an annual contest designed to recognise and reward young people’s achievements in all areas of science, technology, engineering and maths (STEM), as well as helping them build skills and confidence in project-based work.

Winners of The Big Bang Competition in 2017 have since gone on to enjoy a range of other achievements on the back of their successes at last year’s The Fair – including winning international awards; appearing on Springwatch; getting other young people involved in their citizen science project, taking part in conference presentations to industry professionals.

Congratulating the winners, Mark Titterington, Chief Executive of EngineeringUK which organises The Big Bang Competition said: “The winners impressed judges with the insight, creativity and hard work that went into their brilliant entries and they are certainly worthy winners of these illustrious awards. I hope young people across the UK will be inspired by their achievements to enter next year’s Competition online or at a regional Big Bang Fair.”

“While it’s easy to see why these two projects were a hit with judges, I have been blown away by the quality of entries from all of our finalists – both in terms of the work that went into them and the way they showcased that work with such confidence at The Fair. It certainly bodes well for the future that the scientists, engineers and inventors of tomorrow are already producing such astute and creative project work.”

The winners will continue to show their projects to thousands of visitors to The Big Bang Fair at the NEC in Birmingham, which aims to inspire other young people to consider a career in science, technology, engineering and maths (STEM).

The Fair is open to families on Saturday 17th March and young visitors will be able to explore all aspects of STEM, including a host of different hands-on activities, interactive workshops and stage shows.

Nikki Yates, Senior Vice President, GSK Europe, said: “The quality of entries this year was incredibly high right across the board, and highlighted some amazing young talent. It really was a tough decision when it came to picking a winner.

“The best part of the awards for me is how we can get a fascinating glimpse into the minds of our future scientists and engineers. It’s hugely important that we continue to showcase real world examples of STEM and by doing so, the exciting opportunities that a career within a STEM organisation could look like.

Latest from The Big Bang Fair