We are overjoyed to announce that Little Sandbox will be returning to The Big Bang North West, expect coding, robotics and more… Sandbox style!

“We had such a great time at The Big Bang North West last year and we’re thrilled to be returning again. It’s such a great showcase for an organisation of our size and a fantastic way for us to meet teachers and talk about our school activity programmes. We’ll be bringing our Rambots and students can battle them in the arena!”

Little Sandbox is a technology club for kids interested in computer programming, electronics, robotics, animation and other digital media. It’s terrific for the tinkerers, the thinkers and those with an active interest in how this modern world works. As well as computer programming and electronics, their activities include film making, sound recording, stop motion animation and graphic design. 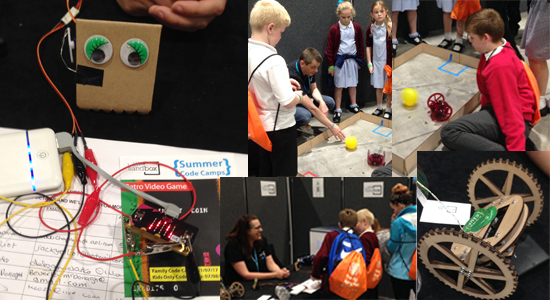 “An interest in computers can be a lonely thing. When your hobbies include taking the toaster apart to see how it works, it can be difficult to find like-minded kids to hang out with. So Little Sandbox brings those kids out of their bedrooms and gets them working and learning together in a fun environment!”

Have you booked your school group yet for The Big Bang North West?
You don’t want to miss this…