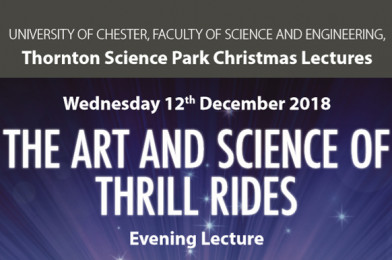 Many people are passionate about theme parks, roller coasters, and thrill rides of all sorts. But did you know there’s both an art and a science to creating these thrill rides in real life?

Talking about everything from psychology to the set design needed to create these intricate ride experiences is thrill engineer Professor Brendan Walker.

Discover why the world’s earliest loop-the-loop coasters had nurses on permanent standby; exactly how far you need to be dropped in the pitch black for it to become terrifying; and why you might enjoy it so much.

Are you brave enough to get wired up by Brendan to a ‘truth machine’ that will publicly reveal just how scared you are…?

Brendan Walker is the world’s first thrill engineer. He originally trained as an aeronautical engineer and industrial designer, and now runs Thrill Laboratory specialising in the creation and study of thrilling experience. Brendan has worked with clients from Alton Towers to Nissan, and is currently touring his own unlikely thrill ride – VR Playground – which collides two technologies: the millennia-old playground swing and 21st century virtual reality.

Brendan is professor of creative industries at Middlesex University. He is a regular broadcaster, most recently presenting an episode of British inventors for the BBC’s Tomorrow’s World revival.