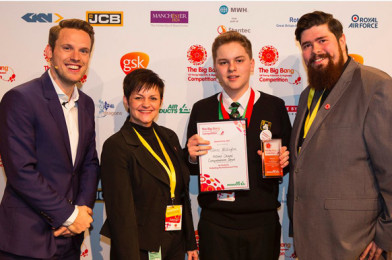 We spoke to James to find out more about his inspiration and Big Bang Competition experience:

“I’m a young Inventor from Sandbach who likes all things STEM. As early as I can remember, I have always been interested in Science and Technology, particularly looking at the way things work and enjoy finding solutions to real-life problems.”

“I entered the Big Bang Fair 2017, which took place at the NEC, Birmingham in March. The Big Bang Fair celebrates all things STEM and I was very honoured to receive the Air Products 2017 ‘Protecting the environment’ Award with my ECO brick invention which is a brick made of recycled household waste.”

“I hope to continue to work on it because it has a real-life application and helps to resolve our landfill situation. I would like to see my brick being used in the construction industry, as I feel there is a gap in the market for my ECO brick. It was an honour to be recognised by such a reputable company and the Big Bang Fair is a great opportunity to be able to showcase your invention to many companies, engineers and scientists. There were many interactive stands where students and visitors could participate. I would highly recommend anyone who has an interest in STEM to enter!”

Congratulations to James and Holmes Chapel Comprehensive School. We can’t wait to hear how your ECO brick develops and hope to see you competing at The Big Bang North West 2017 with your next amazing project!