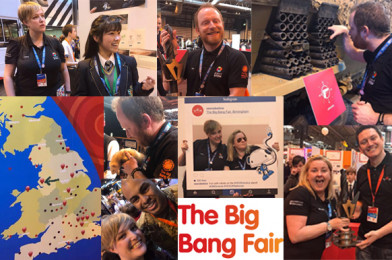 The Big Bang Fair offers a world of STEM inspiration for young people!

The Fair brings classroom learning to life in a big way, with visitors spoilt for choice with hands-on activities and high-octane stage shows.

Young people see STEM brought to life in unexpected way and have the opportunity to talk to scientists and engineers from universities and leading UK companies about their work. It’s fun, free and inspirational, giving students a unique insight into STEM in action.

The Big Bang Fair hosts the UK finals of The Big Bang Competition, with over 200 science and engineering projects competing to amazing prizes, including the titles of UK Young Engineer of the Year and GSK UK Young Scientist of the Year.

All About STEM at The Big Bang Fair 2017