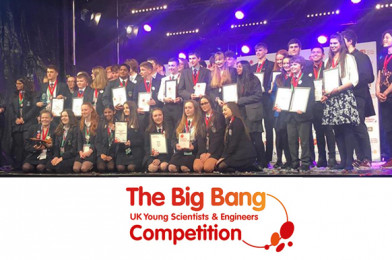 Team Big Bang North West visited The National Big Bang Fair in Birmingham to celebrate STEM and cheer on our North West Big Bang UK Competition entrants. We were so proud of their project presentations, impressed by their innovation and wowed by so many winners!

“It was fantastic to tour the exciting exhibits, meet up with friends of BBNW & see all of the amazing Big Bang UK Competition projects. What an achievement for our competing schools, they are all winners to us. Congratulations to all!” Michelle Dow, Managing Director, All About STEM.

Relive the day in pictures here…

Gateacre created a range of natural bath and skincare products that are not only kind to skin but also kind to the environment. They use special plant extracts like tiger grass, which has healing properties and avoid including anything harmful – no palm oil or plastic packaging! They reached the UK finals of The Competition via the North West heats.

(Thank you to STEM Ambassador & future astronaut, Dr Jackie Bell, for supporting our finalists with us!)

Jack’s project investigates the concept of an assisted walking cane with a sensory system that alerts the user of obstructions detected by the sensors. The project looks at using smartphone technology and streetwise GPS. Jack reached the UK finals of The Competition having won a place at The Big Bang North West.

Many Big Bang UK Competition entrants developed their projects from CREST Awards… have you ran CREST in your school? Find out more…