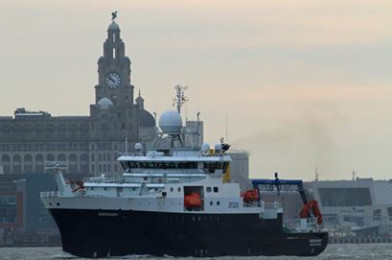 The Natural Environment Research Council has some STEM-sational exhibits and events coming up in Liverpool and Manchester, there’s also a chance to see the RRS Discovery!

What is Into the Blue?

The resounding success of the 2015 ‘Discovery in London’ event galvanised the need in NERC for regular science showcases across the length and breadth of the UK. In 2016 the multi-centre event ‘Into The Blue’ is taking place in the North-West. This event will again see NERC all Centres come together to engage and excite the public about high-impact and long-term science!

The following exhibits and events have been confirmed for Discovery in Liverpool during the 4-7 October 2016.

• The Main Hanger will feature marine exhibits on recent science undertaken on the ships (including NC expeditions and associated NC activity). This area is being led by NOC/NERC Communications.
• The Laboratories will feature a series of hands-on science activities to engage visitors and explain the work undertaken.
• A formal dinner attended by business leaders from the Liverpool region will be hosted by the ship’s Master and NOC’s Kevin Forshaw.
• A formal stakeholder drinks reception, to develop relations between NERC/NOC in the North, will include Government, Industry and Civic leaders and The Lord Mayor of Liverpool as honored guest.
• Pre-registered tours and visits to the ship will be offered to all levels of schools, colleges, Universities and the public from the North West and North Wales.
•  A program of side meetings and engagements will be arranged within the conference facilities of the ship.
• Outreach activities, involving all Centres, will happen along the Dockside and City Centre area to introduce the ship to the members of the community who are not able to board. Science busking will involve local schools in close up science.

Watch this space as there are more to come!