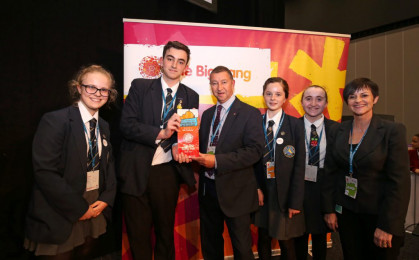 We are unbelievably excited to announce that Air Products will be our Platinum Sponsor for The Big Bang North West 2017!

Air Products are dedicated to nurturing the next STEM generation. They generously sponsored our Inspiration Award as part of The Big Bang UK Young Scientists & Engineers Competition at The Big Bang North West 2016. After discovering how inspirational the event was, they expressed their interest immediately to play a bigger part and reach out to more young people in 2017. Our Platinum Package was the perfect way for Air Products to invest in their goal and they are now our first confirmed 2017 sponsor, STEM-sational!

Air Products touches the lives of consumers around the globe in positive ways every day. With over 20,000 employees and operations in more than 50 countries, they serve customers across a wide range of industries from food and beverage, health and personal care to energy, transportation and semiconductors.

Founded in 1940, Air Products has built a reputation for its innovative culture, operational excellence and commitment to safety and the environment. Their aim is to develop lasting relationships with both customers and communities based on human qualities: understanding needs, a business with integrity and honesty, and a passion for exceeding expectations.

Air Products’ are one of the UK’s leading industrial gas companies.  Their products are used to help produce many everyday items, from liquid nitrogen for food freezing to helium in balloons and breathing gases for underwater exploration.

We will be revealing their amazing activities list soon!

Would you like to sponsor The Big Bang North West 2017?
Email [email protected]