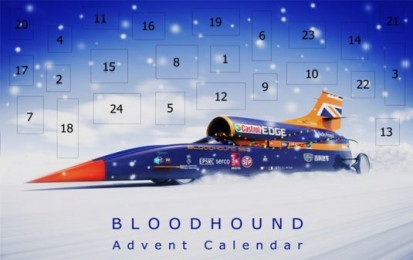 BLOODHOUND SCC: Your name could be on THE SUPERSONIC CAR!

Join BLOODHOUND SCC as they count down to Christmas and you could win your name on their supersonic car!

Every day until December 24th, BLOODHOUND will be posting a Supersonic Surprise on their Facebook and Twitter pages.

Throughout the competition they will be offering a different Supersonic Surprise each day. Examples of the prizes include your name on the tail fin of the car, a Christmas card signed by the team, some of the skin pins used in the construction of the car (with a certificate of authenticity), a cuddly BLOODHOUND dog & BLOODHOUND books and photos.

Find out more about The BLOODHOUND Project

All About STEM: BBC Newsround – BLOODHOUND and British Army engineer success for the future STEM generation