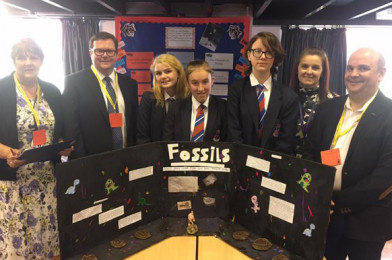 ‘STEM which is an acronym for Science, Technology, Engineering and Mathematics is widely used in science education and Haydock High School is working hard to engage more pupils in these subjects.’

Conor McGinn MP said “It is good to see young people getting enthused by Science especially the number of girls who were taking part in the Science Fair. STEM in our schools is one way we can equip future generations through Science, Technology, Engineering and Mathematics to help deliver jobs and growth in a dynamic and innovative local economy.”

We couldn’t have said it better ourselves!

Congratulations to Haydock High School from Team All About STEM. It’s fantastic to see this following your Big Bang North West visit and what an awesome Science Fair!