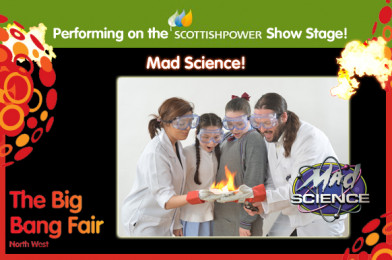 We are super-excited to announce that Mad Science will be performing at The Big Bang North West 2018!

Discover some dramatic reactions in their exciting show: Spin, Pop, Boom!
Is it possible to turn water into Ribena by simply pouring it in to a new, empty glass?
How does centrifugal force help avoid water spillages on a rapidly spinning plate?
Would you like to meet two chemically-created Genies; Steaming Steve and Frothy Freda?

Be sure to catch their show on the sensational ScottishPower Show Stage, it’s not to be missed!

“We can’t wait to perform our Spin, Pop, Boom! show at this year’s Big Bang North West! There are so many opportunities here in the North West for careers in STEM, and The Big Bang is such a great showcase of the possibilities. We’re ready to help inspire the innovators of the future!”

“Our mission is to inspire children to imagine themselves as the scientists of the future, on a scale that makes a difference. For more than thirty years Mad Science have been the world’s market leaders in the Scientific Enrichment industry, providing hands-on, science-based programs and activities.

We passionately believe that Science, Technology, Engineering and Maths should be appealing and accessible to every child, and we’re working hard to bring our programmes to as many UK children as possible. In 2017 over 28 thousand UK children took part in a Mad Science After School Club, and nearly half a million children saw a free Mad Science School Assembly!”